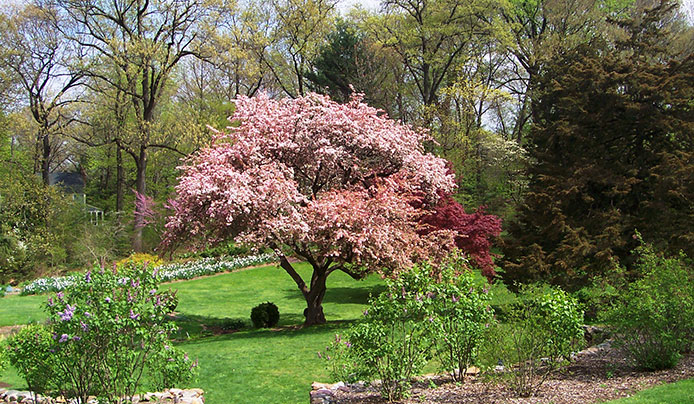 Plan a visit once per season – at least!

There's always something in season here at Reeves-Reed Arboretum. Late winter is graced by the color and fragrance of our witch hazel collection, early bulbs poke up in unexpected places, and winter jasmine spills over rock walls in a manner calculated to bring on spring fever. The Daffodil Bowl fills in April, the Rose Garden comes to life in May, the Perennial Border changes almost daily through late summer into early autumn. The century-old sugar maple leads the fall fireworks of foliage color and late bloom.

1. The Sugar Maple
Acer saccharum
Probably >100 years old. Circ: 12'7" at 4'. Height: > 65'.
The Sugar Maple is tapped during our Maple Sugaring Fest. Forty gallons of sap make one gallon of syrup; sap flows on sunny days in late January, throughout February, and into March. There are over 30 horticultural selections of Sugar Maple, some made for ornamental qualities (fall foliage) and some for sugar content (up to 4%, double the norm). The Calvert Vaux plan called for three sugar maples in approximately the location of this surviving tree and was most likely planted by the Wisners in accordance with Vaux's suggestion.

2. The Elephant Tree
Fagus sylvatica ('Purpurea'?)
Probably > 100 years old. Circ: 13'4" at 4'. Height > 75'
This was a very popular landscape tree in the early 20th century. Two purple beeches were included in the Calvert Vaux plan, although neither of the indicated positions correspond exactly to this tree. The species was first cultivated in Europe before 1772. Dozens of other beech cultivars exist, including weeping, cutleaf, fastigiate, and variegated. The American beech, Fagus grandifolia, is also a beautiful tree, and is well represented on the Arboretum grounds. The Nature Grove area, where this tree is located, was dedicated as the Wesson Family Nature Grove in 2012, when the stone seating was installed. Planted by interns, volunteers, and special-needs students, it functions as an outdoor classroom and features New Jersey and other North American native herbaceous plants, trees, and shrubs.

3. The Three Ginkgos
Ginkgo biloba
Probably >100 years old. Height: 65-85'
According to one family member, these ginkgos were planted by the Wisners, probably early in their residency. Ginkgo biloba has been around in more or less its current form for some 270 million years (the Permian period – before the age of dinosaurs!), and is considered to be an example of a living fossil. Six ginkgos survived the atomic explosion in Hiroshima and are still alive today. Many non-irradiated ginkgos are very long-lived, with some specimens claimed to be thousands of years old (claims of extreme age in trees should always be subject to healthy skepticism). Extremely old ginkgos form strange pendant protuberances on their branches called chi-chis, which is Japanese for breasts. The fruit is edible, but smells like rotting food or vomit. Try researching ginkgos to uncover even more remarkable facts about these fascinating trees.

4. Franklin Tree
Franklinia alatamaha
Age uncertain. Height: 12'
John Bartram, arguably one of America's first and greatest plantsmen, was active during the middle of the 18th century as a plant collector and botanist. He and Benjamin Franklin were co-founders of the American Philosophical Society, and his botanical garden near center-city Philadelphia was probably the first true botanic garden in North America. In 1765, he and his son William discovered a colony of beautiful flowering trees near Georgia's Altamaha River. On a later trip, William collected seed from the trees, returning to Philadelphia in 1777 (the year of his father's death). Despite extensive travels throughout the South, neither John nor William ever saw the tree growing in another location, and by 1803, even the colony that they had discovered had disappeared. Rumors of the tree's continued existence continued until 1840, after which it was considered to be extinct. The tree, named Franklinia in honor of John's friend, survives today only through the seed collected by William. It is a member of the tea family, but its relationship to other genera is still unclear. It is one of America's most beautiful native trees, with excellent fall color and handsome bark, in addition to the striking flowers. Only about 5% of present-day Franklinia seed is fertile.

5. Bald Cypress
Taxodium distichum
Age: 30-40 years. Height: 50'
The bald cypress is a North American native (it has a Mexican cousin), and is one of the relatively few deciduous conifers, dropping its needles in fall after they turn a delicate russet. It prefers swampy conditions and can even grow in standing water, but is remarkably adaptable to drier locations as well. In wet locations, the bald cypress forms curious upright growths from its root system, called "knees". The function of these cypress knees is not well understood.

6. Katsura Tree
Cercidiphyllum japonicum
Age: 30-40 years old. Height: 40'
Katsuras are beautiful lawn trees, reaching over 100 feet in ideal conditions. The generic name comes from the resemblance of the leaves to those of the unrelated genus Cercis (redbuds). In the autumn, the leaves turn yellow and exude a delightful fragrance best described as cotton candy. The katsura is one of renowned tree expert Michael Dirr's favorite trees. Weeping and dwarf forms are available (a weeping katsura is located just across the lawn from this large specimen). There are only two closely related species in the genus, which is the only genus in the family.

7. Giant Sequoia
Sequoiadendron giganteum
The Giant Sequoia grows to over 250' on the west coast; the oldest known specimen is accurately dated to 3,500 years, making it one of the oldest living organisms on the planet. It is fire-adapted with spongy bark and seeds that are often released by the heat of a forest fire. However, it is poorly adapted to severe East Coast winters and hot, humid summers. The Giant Sequoia is popular in Europe.

8. Sourwood, Sorrel Tree, Lily-of-the-Valley Tree
Oxydendrum arboreum
Age: unknown. Height: 30-40'
A native American tree, the Sourwood is in the same plant family as Rhododendrons and Azaleas. It boasts lovely fragrant flowers in early summer, and its fruit persists in giving the tree a lacy appearance through winter. It produces great red fall color and attractive bark. We have another specimen here in the woods across the drive from Wisner House.

9. Epimedium collection, head of serpentine walkway
Epimedium spp.
Epimedium is one of the best ground covers for dry shade; plants take a while to establish, but are drought-tolerant from then on. Dainty spring flowers in a variety of colors hover over colorful, new foliage. Epimedium should be cut back in late winter to allow new growth to unfold. It is in the barberry family.