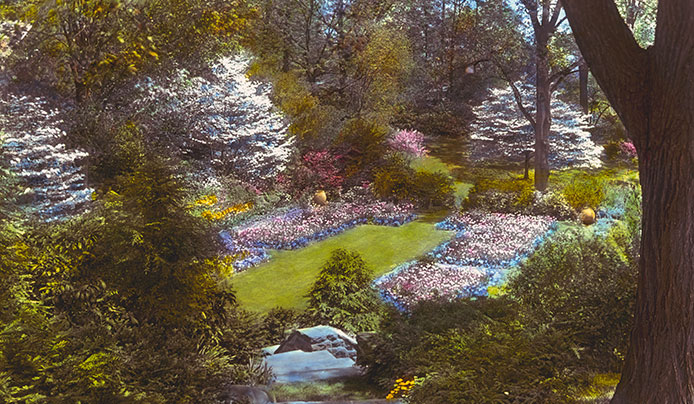 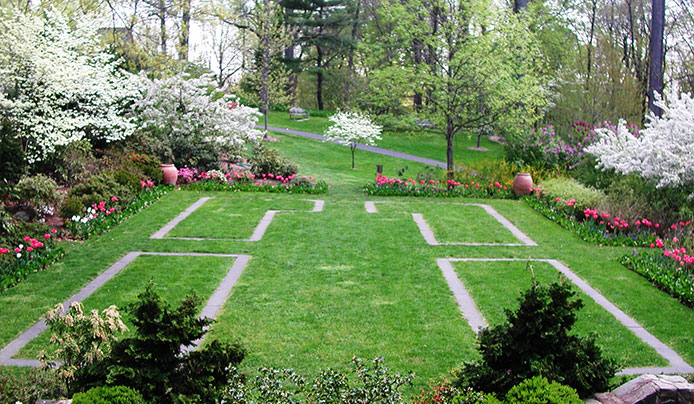 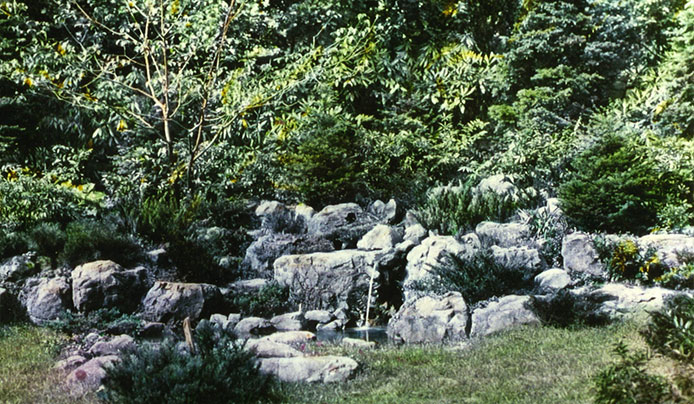 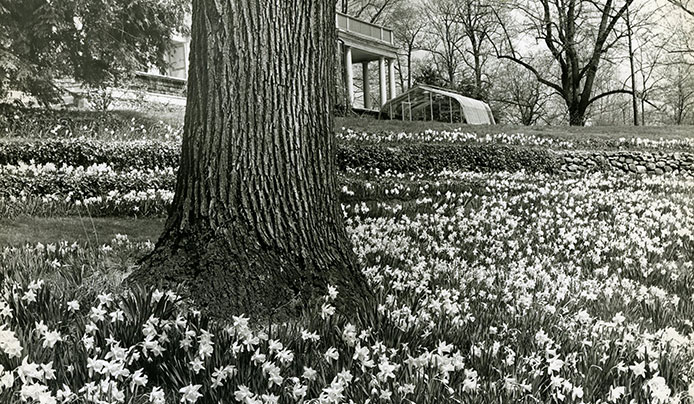 Reimagining the past. Recreating for the future.

Three Reeves-Reed Arboretum gardens – the Azalea Garden, the Rose Garden, and the Rock Garden – are maintained as closely as possible to their original appearance. One of our newest features, the Time Capsule Garden, moves through time and space, recreating a year of gardening history in various places on the grounds. In 2016, visit 1940 on the south side of Wisner House.

The Azalea Garden
During the Reeves period, what is now called the Azalea Garden was simply the Flower Garden. It was the focal point of the property: the garden that Mrs. Reeves looked out onto each morning; the garden where she spent much of her time and energy; and, the garden where her daughter was married in 1940. The millstone that had once been the centerpiece of the Rose Garden is now embedded in the landing of the stone steps at the western end of the garden. The bluestone borders in the lawn of the Azalea Garden mark the outlines of the perennial beds that Mrs. Reeves created and later abandoned due to the cost and labor of maintaining them.

The Rose Garden
Now called The Susan Graham Reeves Rose Garden, this garden is a traditional symmetrical plan probably originated by Carl Pilat and installed around 1925. Mrs. Reeves was a dedicated and enthusiastic rose grower. As president of the Summit Garden Club, she was persuaded by her fellow members to show her roses at the New Jersey Rose Show in nearby Morristown, where she was reportedly "showered with honors." In the near future, Reeves-Reed Arboretum will pay homage to its resident rosarian by becoming the home of the New Jersey Heritage Rose Collection.

The Rock Garden
Now known as the Rock Pool, this feature was adapted by Carl Pilat from Ellen Biddle Shipman's design and was installed around 1925 (the same era as the Rose Garden). Originally a traditional rock garden in full sun featuring alpine plants, the pond and waterfall are now a shady retreat that offers an inviting habitat for birds and garden visitors.

The Time Capsule Garden
The year 1940 was one of transition at 165 Hobart Avenue, and in the world at large. It was the year that the Reeves' daughter, Susan, was married in the Flower Garden on August 10. It was the last year that the United States remained, at least technically, a non-combatant in World War II, but it was also the year that the Selective Service Act was passed.