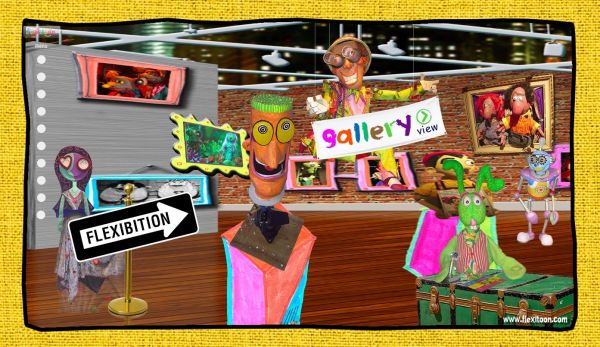 Summit, NJ As part of our continuing community outreach, Reeves-Reed Arboretum, working with the Grand Summit Hotel, presents FLEXIBITION by FLEXITOON, original artwork inspired by and created by master puppeteers, Craig Marin and Olga Felgemacher, better known as FLEXITOON, now at the Hat Tavern and running through October 30.

Before there was theatre...before there were spoken words...there were puppets. From the beginning of human existence, the process of bringing life to inanimate objects walked hand-in-hand with evolution. Thus, a select breed of artists known as "puppeteers" was born.

Olga and Craig call their creations FLEXITOONS and have built that trademark into an award-winning puppet production company. Millions of children have grown up watching their puppets on the hit PBS series, Shining Time Station, starring George Carlin and Ringo Starr; on Nickelodeon's Pinwheel; Showtime's Weekly Reader series, KID'S TV; and the long-running The DJ Kat Show, on Fox. The FLEXITOON Talking Stain commercial for Tide-To-Go, was voted a 'top Super Bowl Commercial of all Time.

Recognized both nationally and internationally, on film, television, at theatre festivals, theme parks, and art galleries, FLEXITOON has created puppet art both off-Broadway and at Lincoln Center. Their multi-media exhibition, Art That Moves-The World of FLEXITOON, featuring over 100 of their puppets from stage and screen, and in conjunction with live performances, has met with resounding acclaim wherever presented. FLEXIBITION by FLEXITOON at The Hat Tavern, offers a backstage glimpse of original art work, pre-production sketches, story boards, and stage backdrops inspired by and created for live theatre, television, commercials, film, and the internet.

FLEXIBITIION by FLEXITOON will be on exhibit at the Hat Tavern of the Grand Summit Hotel through October 30. The public is invited to a meet-the-artist reception on Thursday evening, August 3, from 6 to 8 pm – refreshments will be served. All of the works are for sale and the artists will donate 30% of each purchase to Reeves-Reed Arboretum. For information about this exhibit, please contact Frank Juliano, Executive Director, Reeves-Reed Arboretum, f.juliano@reeves-reedarboretum.org.