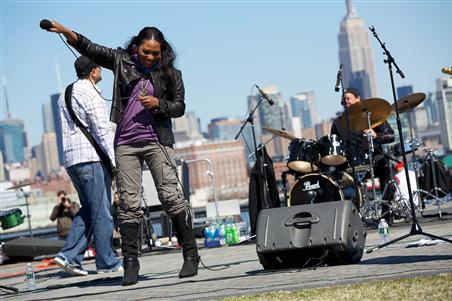 Summit,NJ Break out your dreadlocks and come prepared to swing your hips when Reeves-Reed Arboretum welcomes back the MASSIVE Reggae Band on Wednesday evening, September 9, as the Arboretum concludes this year's concerts-in-the-garden series, Sounds of a Summer Night '16.

Reggae is a music genre first developed in Jamaica in the late 1960s. Stylistically, reggae is a melting pot embracing influences from Africa, Latin America, Europe, and the U.S., combining elements of American jazz and rhythm n' blues, with ska, rocksteady, and calypso. As well as giving the world a fresh new sound, reggae was instrumental in highlighting the Rastafarian movement, dealing with subjects such as faith, love, relationships, poverty, injustice, and other broad social issues.

This final concert of the Sounds of a Summer Night series will take place on Wednesday evening, September 9. The grounds of the Arboretum will open at 6 pm for concertgoers to picnic, and the performance is from 7 to 9 pm. You are encouraged to bring lawn chairs and blankets. The cost is FREE to Reeves-Reed Arboretum members (thanks to underwriting support from Investors Bank). Otherwise, there is a $10 donation at the door for non-members; students are $5 with a valid ID. The MASSIVE Reggae Concert is dedicated to Reeves-Reed Arboretum supporter, Full Service Aquatics and to this year's ART in the Garden committee members.

Sounds of a Summer Night is sponsored, in part, thanks to support from Nick & Tracy McKee, the Grand Summit Hotel, and the Summit Area Public Foundation. For more information about events, programs, trips, and more, please check our website, www.reeves-reedarboretum.org or call the office at 908-273-8787.

About Reeves-Reed Arboretum: Celebrating over 40 years as an historic public garden, education resource, and non-profit conservancy, Reeves-Reed Arboretum seeks to engage, educate and enrich the public through horticulture and environmental education, and the care and utilization of the gardens and estate. Open 7 days a week from dawn till dusk, the Arboretum is listed on both the National and New Jersey State Historic Registers. Funding for RRA has been made possible in part by the NJ Historical Commission, a division of the Department of State, through a grant administered by the Union County Office of Cultural & Heritage Affairs, Dept. of Parks & Community Renewal.