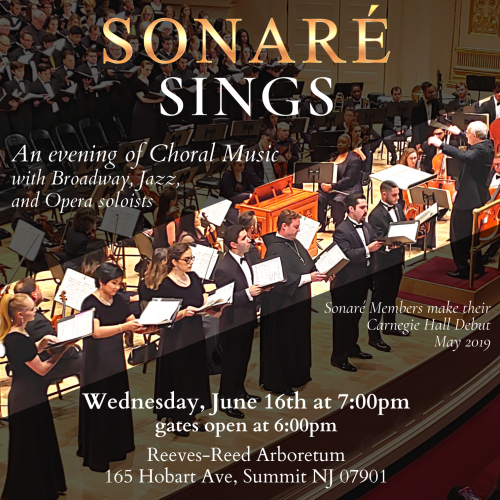 SOUNDS OF A SUMMER NIGHT

SUMMIT, NJ – Bring your blankets, lawn chairs and picnic baskets to Reeves-Reed Arboretum and celebrate the return of its summer concert series, Sounds of a Summer Night! All performances will be held Wednesday evenings in the Yon and Francie Cho Garden Amphitheater on the grounds of Reeves-Reed Arboretum (165 Hobart Avenue, Summit). This super summer concert line-up includes the following:
June 16 - Sonaré Sings, The Continuo Art Foundation's professional ensemble of young artists will open the summer series with a special evening of Choral Music featuring Broadway, Jazz, and Opera soloists. Members of Sonaré have been afforded unprecedented opportunities including Carnegie Hall debuts and international opera appearances.

July 28 - The Ryan Hernandez Quartet will jazz up July with its cool but classical ensemble performing a repertoire of original compositions as well as music of the Great American Songbook. Their performance will include music written and/or performed by artists like Frank Sinatra, Louis Armstrong, Duke Ellington, George Gershwin and Cole porter.

August 25 - Random Test Reggae has been rocking New Jersey with music heavily coated in Caribbean traditions since 1999. With members hailing from all over the Caribbean, the group brings a cache of authentic reggae and calypso rhythms in true West Indian fashion. They will take you on a musical journey that pays tribute to pioneers in reggae and soca music – from the early days to today, staying true to the real roots and culture.

The Arboretum grounds will open at 6 p.m. for concert goers to picnic and enjoy the gardens. Performances will begin at 7 p.m. Entry is free for Reeves-Reed Arboretum Members and children 3 and under. Non-Member tickets are $15 and Students $5. Tickets are available online at reeves-reedarboretum.org or at the entry gate the evening of each performance. Student tickets must be purchased at the gate. Sounds of a Summer Night is sponsored in part by INVESTORS BANK and Ciel Power.

About Reeves-Reed Arboretum: Celebrating over 40 years as a historic public garden and education resource, Reeves-Reed Arboretum engages, educates and enriches the public through horticulture and environmental education, and the care and utilization of the gardens and estate. Open 7 days a week, the Arboretum is listed on both the National and New Jersey State Historic Registers. Funding for RRA has been made possible in part by the NJ Historical Commission, a division of the Department of State, through a grant administered by the Union County Office of Cultural & Heritage Affairs, Dept. of Parks & Community Renewal.