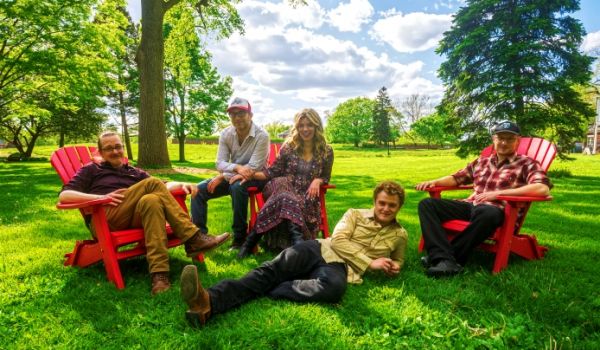 CONCERTS IN THE GARDEN

SUMMIT, NJ  Bring your blankets, lawn chairs and picnic baskets to Reeves-Reed Arboretum and celebrate summer with the 2022 concert series, Sounds of a Summer Night!  All performances will be held on select Wednesday evenings on the grounds of this non-profit public garden located in Summit. The super summer concert line-up includes the following:

June 15 - The Ryan Hernandez Quartet, back by popular demand, will be jazzing up the garden in June! This cool but classical ensemble will be performing a repertoire of original compositions as well as music of the Great American Songbook.  Their performance will include music written and/or performed by artists like Frank Sinatra, Louis Armstrong, Duke Ellington, George Gershwin, and Cole Porter.

July 13 - The Suyat Band will be bringing a touch of Hawaii to the Mainland and Reeves-Reed Arboretum! Steadily building a reputation as one of the most consistently crowd-pleasing live acts on the East Coast, The Suyat Band delivers high-energy hits from yesterday and today with rock-solid musicianship and warm-hearted Aloha spirit. Led by its namesake, Hawaiin-born Matthew Suyat, a champion at the Apollo Theater and American Idol Top 24 Finalist, the band has performed at such historic venues as NYC's BB King's, Stephen's Talkhouse, and NJ's Wellmont Theater.

August 10 - CC & The Boys will bring the Grand Ole Opry to Reeves-Reed Arboretum this August!  The band well-known for their old-school country and southern blues charm (with a twist) will bring high energy and excitement to the gardens. Based in NYC, CC (Christine Cherry) formed the band in 2016 with the original release of her album, "Worth a Shot." The band is a regular staple in the growing NYC country music scene including "Opry City Stage" (Grand Ole Opry) in Times Square and other notable venues in Nashville and across the country.  Get your boots on and be ready to dance!

August 24 - Sahara Moon will serenade you in the garden this summer with her silvery song and indie flair.  The singer-songwriter, inspired by artists Norah Jones and Brandi Carlile, incorporates a mix of folk, jazz, blues and vulnerability within her lyrics and guitar techniques.  With special guest, Zinnia Moon, the "Moon Sisters" will be sure to enchant you on this summer night under the stars.

Hailing from the Jersey Shore area, Sahara Moon has been busy making a name for herself in the NY/NJ/Philadelphia region and more recently in Nashville.  She kicked off 2020 with two single releases, "Everything Will Be Alright" and "Beauty In A Rose," off her debut album Worthy. She has had the pleasure of sharing the stage with national acts, including Blackberry Smoke, Tyler Bryant & The Shakedown, Nick Perri & The Underground Thieves, Stephen Kellop, and the Robert Cray Band.

The Arboretum grounds will open at 6 pm on these select evenings for concertgoers to picnic and enjoy the gardens.  Performances will begin at 7 pm.  Entry is free for Reeves-Reed Arboretum members and children 3 and under.  Non-member tickets are $15 and students $5. Tickets are available at reeves-reedarboretum.org or at the entry gate the evening of each performance. Student tickets must be purchased at the gate. All concerts are rain or shine, no refunds. In the event of inclement weather, the performances will move indoors. Reeves-Reed Arboretum is located at 165 Hobart Avenue in Summit, NJ. Questions? Contact 908.273.8787, x1010.

Celebrating over 40 years as a historic public garden and education resource, Reeves-Reed Arboretum engages, educates, and enriches the public through horticulture and environmental education, and the care and utilization of the gardens and estate. Open 7 days a week, the Arboretum is listed on both the National and New Jersey State Historic Registers. Funding for RRA has been made possible in part by the NJ Historical Commission, a division of the Department of State, through a grant administered by the Union County Office of Cultural & Heritage Affairs, Dept. of Parks & Community Renewal.