Plan Your Visit to the Arboretum

Everything you need for an enjoyable day

Some of the many activities available when visiting:

Accessibility for All:  Much of the historic gardens and indoor spaces of Reeves-Reed Arboretum are accessible to all our visitors, with ramps and paved pathways for easy maneuverability. However, due to the garden's naturally varied topography, portions of our historical site may not be easily accessed without assistance.  We do not have wheelchairs available for rent onsite.  Reeves-Reed Arboretum offers:

Reeves-Reed Arboretum strives to make every visitor welcome to our grounds and buildings, and plans are underway to increase accessibility for all. When planning your visit, please let us know if there is any service we can provide to make your experience more pleasant.  If you are arriving by car, please pull up very close until the automatic gate opens.

Map of Gardens and Hiking Trails

Use this map to find a particular building or garden, or get to know the general layout of the Arboretum. Zoom out for hiking trails. Please click here for a map of the Arboretum grounds.

Upcoming Exhibit: To Be Announced.


Our Suggested Donation is per visitor. Donation boxes are located on the grounds, including outside the Visitors Center, Education Center, and inside Wisner House.

Please consider a membership. Members receive discounts on events and classes, as well as other benefits.

View the benefits of becoming a member!

There is restricted access during special events. Signs will be posted to let you know.

The entrance gate opens automatically. Pull your car up slowly to trigger the sensor. As you pass Wisner House on your right, parking is straight ahead. The one-way exit brings you out to Hobart Avenue again.

Dogs are not allowed except for service animals. Please see Garden Etiquette below for details.

If you are bringing food, we ask that you please take all garbage with you and leave no trace behind.

Once a country estate, Reeves-Reed Arboretum is now a 13.5 acre public garden listed on the National and State Registers of Historic Places. Its estate and gardens represent design trends by prominent late 19th and early 20th century landscape architects, including Calvert Vaux, a partner of Frederick Law Olmsted. Want to know more? Join us for a tour! 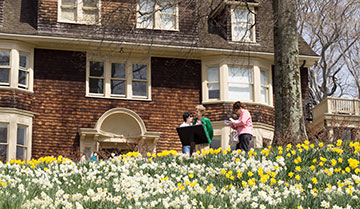 Enjoy a leisurely self-guided walk through the Arboretum grounds. 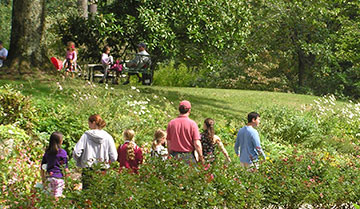 Free guided tours of the Arboretum take place most Saturdays at 10:30 am and 1:30 pm from May through October. 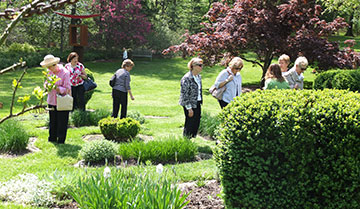 This 45-60 minute guided group tour is a great way to experience the beauty, diversity and horticultural significance of Reeves-Reed Arboretum.

This tour is temporarily suspended.

Make a discovery at the Arboretum and enjoy a unique family experience. 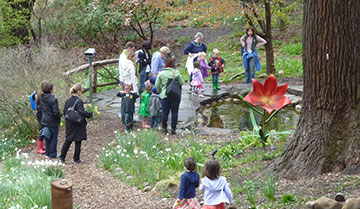 Please respect the beauty of the 13.5 acres which encompass Reeves-Reed Arboretum by following the policies below.

For more information or to schedule a group tour please contact Doreen Schindler at 908-273-8787 ext. 1010 or d.schindler@reeves-reedarboretum.org 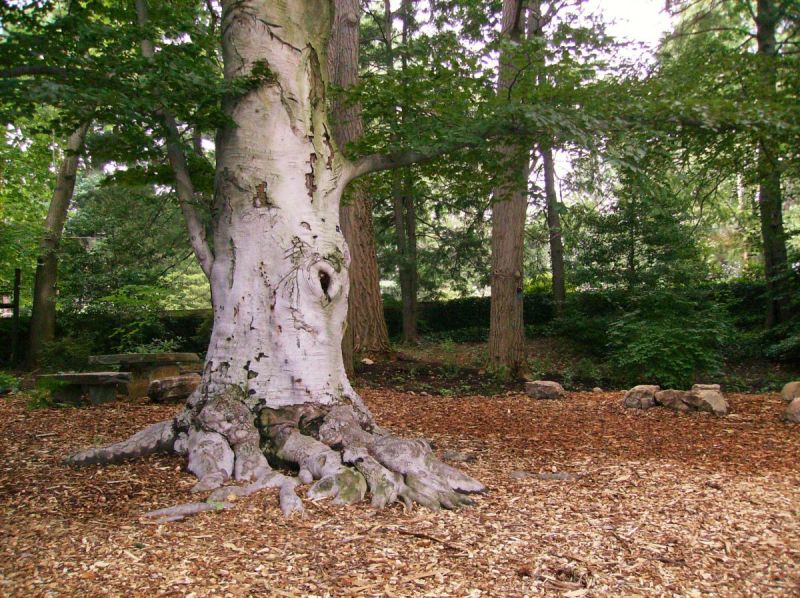 At over 75 feet tall, you'll know why the purple beech (Fagus sylvatica 'Purpurea') was nicknamed the Elephant Tree—check out that trunk! It is likely over 100 years old and has a circumference of 13 feet, four inches. This was a very popular landscape tree in the early 20th century. Two purple beeches were included in the Calvert Vaux plan, although neither of the indicated positions corresponds exactly to this tree. The species was first cultivated in Europe before 1772. Dozens of other beech cultivars exist, including weeping, cutleaf, fastigiate, and variegated. The American beech (Fagus grandifolia) is also a beautiful tree, and is well represented on the Arboretum grounds. The Nature Grove area, where this tree is located, was dedicated as the Wesson Family Nature Grove in 2012, when the stone seating was installed. Planted by interns, volunteers, and special-needs students, it functions as an outdoor classroom and features New Jersey and other North American native herbaceous plants, trees, and shrubs. 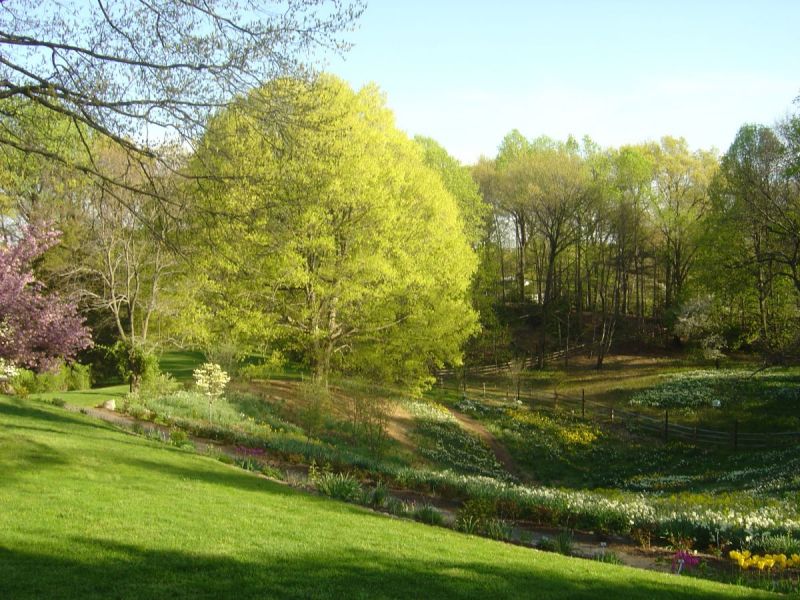 More than 100 years old, the Sugar Maple (Acer saccharum) has a circumference 12 feet, seven inches and reaches more than 65 feet. Every year it is tapped during our late-winter Maple Sugarging Fest. Forty gallons of sap make one gallon of syrup; sap flows on sunny days in late January, throughout February, and into March. There are over 30 horticultural selections of Sugar Maple, some made for ornamental qualities (fall foliage), some for sugar content (up to 4%, double the norm). The Calvert Vaux plan called for three sugar maples in approximately the location of this surviving tree. The Wisners probably planted it in accord with Vaux's suggestion. 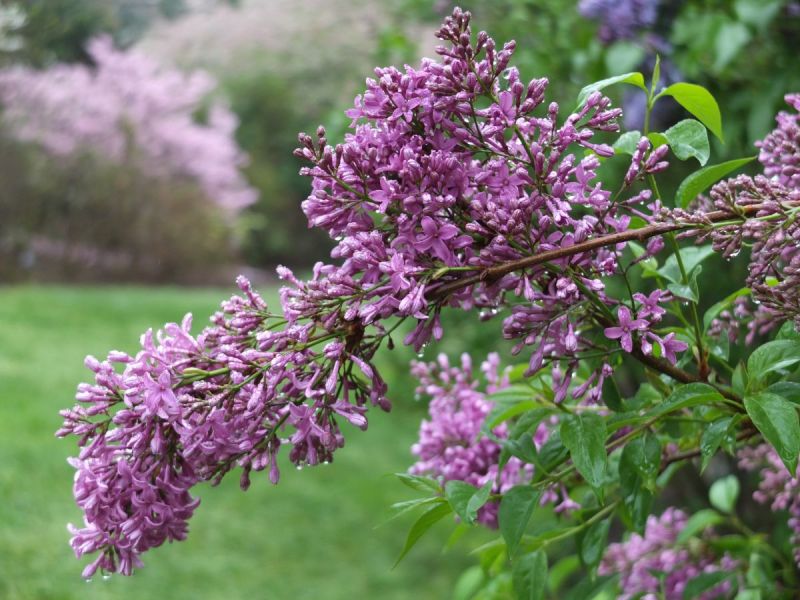 The Lilac Garden features many French hybrids (Syringa vulgaris), as well as newer species such as 'Pocohontas' and interesting cut-leaf varieties. Blooming in May, this is a favorite garden for Mother's Day. This garden shares an axis with the Herb Garden. 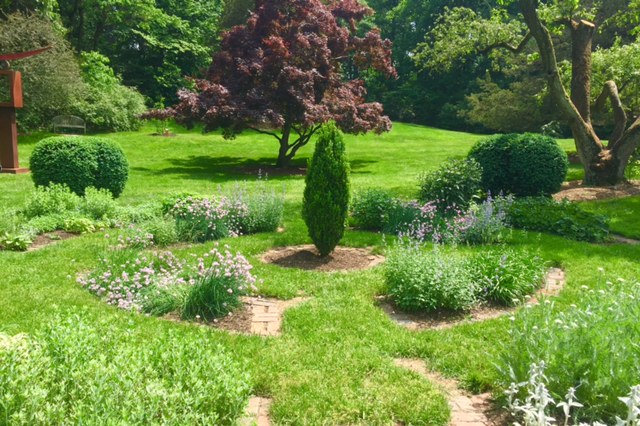 This garden is funded and maintained by the Summit Garden Club. Planted in the 1960s by the Reeves family, its Mandala pattern is based on an 800 AD Tibetan design. The large tree shading part of the garden is a crabapple that blooms in April. This garden is one of the few gardens where visitors are encouraged to touch the plants, in order to enjoy the various fragrances. Children love the texture of Lamb's Ear (Stachys byzantina). 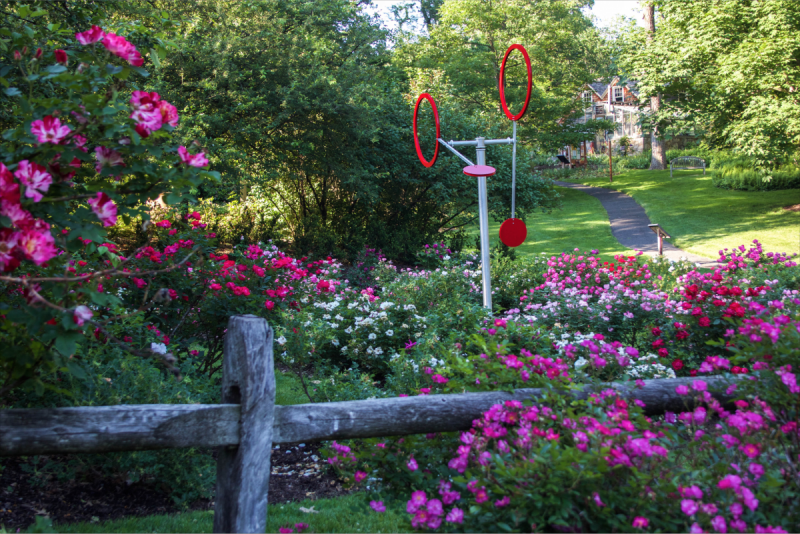 This garden is a traditional symmetrical plan probably originated by Carl Pilat and installed around 1925. Mrs. Reeves was a dedicated and enthusiastic rose grower. As president of the Summit Garden Club, she was persuaded by her fellow members to show her roses at the New Jersey Rose Show in nearby Morristown, where she was reportedly "showered with honors." In the near future, Reeves-Reed Arboretum will pay homage to its resident rosarian by becoming the home of the New Jersey Heritage Rose Collection. 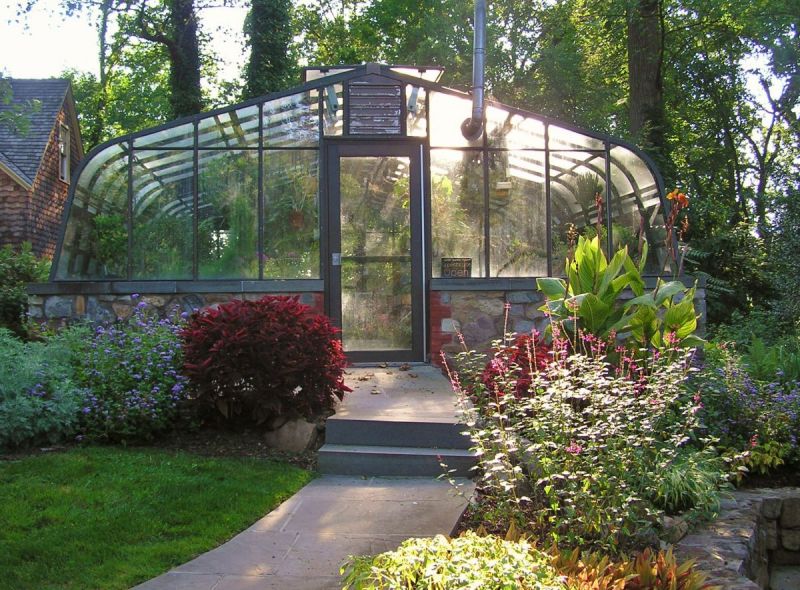 What you see today is a replica of the greenhouse that once sat on the south side of Wisner House. It is used for educational programs, display, as well as plant production for the house and grounds. The greenhouse is a wonderful place to visit any time of year, but especially on a cold wintry day! 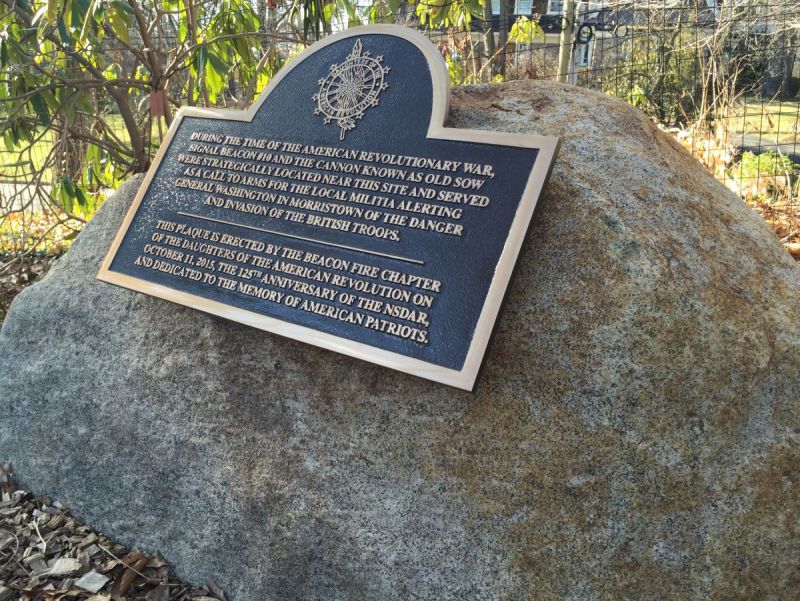 An 18th-century farmer used his property, which included what is now Reeves-Reed Arboretum, as a signal station to warn General Washington of the imminent movement of the British over the Hudson River against his encampment in Morristown. Visit the large rock donated by the Daughters of the American Revolution that commemorates this history. 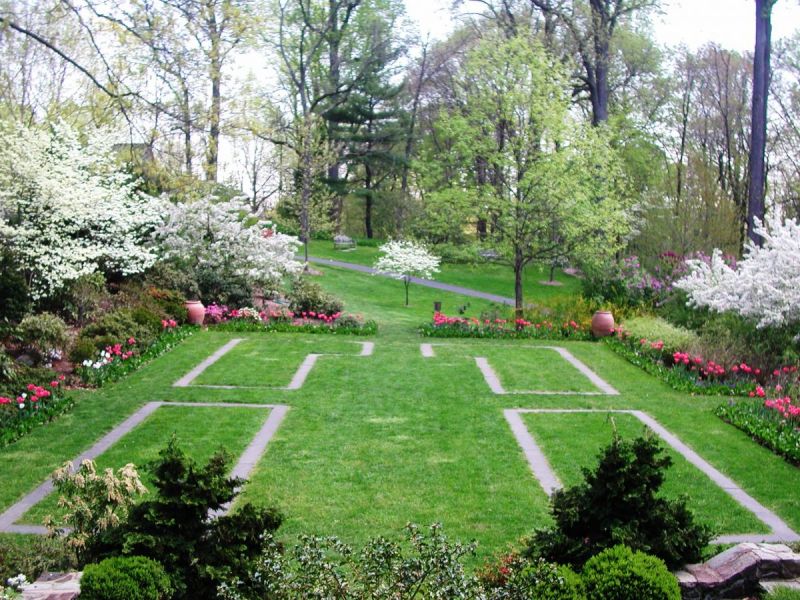 During the Reeves period, what is now called the Gretchen Keller Azalea Garden was simply the Flower Garden. It was the focal point of the property: the garden that Mrs. Reeves looked out onto each morning, the garden where she spent much of her time and energy, the garden where her daughter was married in 1940. The millstone that had once been the centerpiece of the Rose Garden is now embedded in the landing of the stone steps at the western end of the garden. The bluestone borders in the lawn of the Azalea Garden mark the outlines of the perennials beds that Mrs. Reeves created and later abandoned due to the cost and labor of maintaining them. 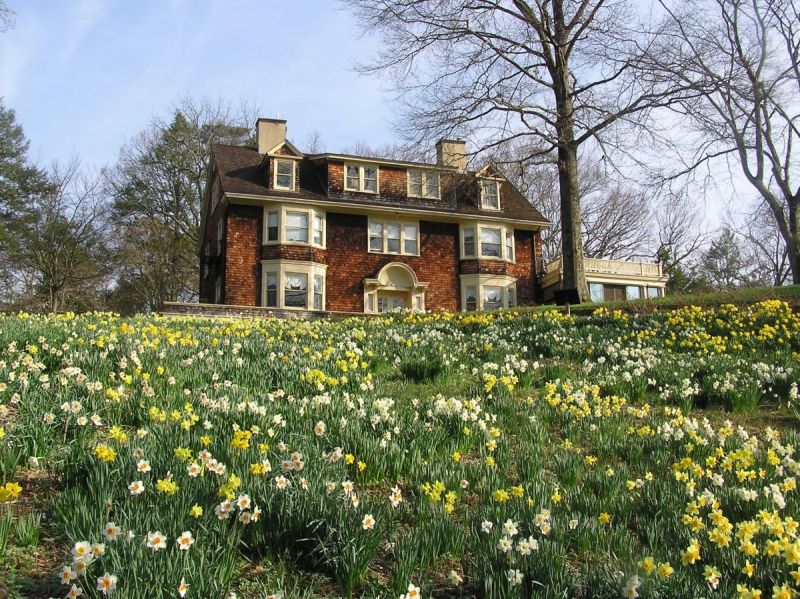 Wisner House was built in 1889 for the Wisner family by architects Babb, Cook & Willard. The Wisners were textile importers who owned their own clipper ship that rounded the Cape to travel to China. The house is considered Colonial Revival in style. Upper windows of the house featured special screens that opened out to allow pot shots of encroaching rabbits on the lawn. The first house to be built on this side of Hobart Avenue, a pair of goats from their grandfather provided the children with the chance to have goat-cart races up and down the road.