"The next time you venture into the great outdoors, keep an eye out for Ginkgo biloba trees, which can be easily identified by their distinctive fan-shaped leaves. If you find one—and you likely will, as the native Chinese plant is now ubiquitous in the United States—take a moment to pluck a few leaves, snap some photographs of the scene, and record your observations via the iNaturalist mobile app. Then, package your sample in an envelope, drop it into the mailbox, and give yourself a pat...

This past Friday night marked the 6th annual Members Only Great American Backyard Campout. The sun was shining, the temperature was unseasonably warm and there was an air of excitement as families began unloading their gear and scouted out the best place to pitch their tent. Who would have thought that in just a few hours, the clear blue sky would be replaced with moisture laden clouds just waiting to unload on the unsuspecting campers sleeping below? Many campers woke to wet sleeping bags an...

Lessons From A Zombie Apocalypse 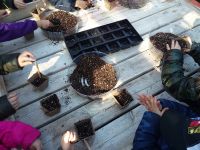 The Benefit of Experiential Environmental Education